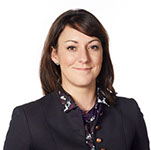 She decided to pursue a solo career and founded her legal study in Montreal in 2011, and in 2012, she decided to take on new challenges and purchased Mtre Maurice Grenache’s long time existing legal study to run it after his departure for retirement, and she also bought a second legal study in 2015 to develop a new branch of law in her office.

She has been around Notaire-Direct and Mtre Forget since that time and they agreed on merging their knowledge and businesses in 2016.